The legal challenge (Carraway Guildford (Nominee A) Limited and Others v Regis UK Limited and Others, No. 8276 of 2018)  by landlords against a retail company voluntary arrangement (CVA) was accepted by Mr Justice Zacaroli.

Regis, viewed by many as a test case, was heard in the High Court by Mr Justice Zacaroli, one of four leading judges considering the arrangements that form the bases of CVAs, schemes and restructuring plans.

The Regis landlords argued in particular that inadequate disclosure was made in relation to a number of transactions and that the nominee acted in breach of his duties.  Blanket vote discounting was also challenged.

The court was asked to consider whether the nominee was in breach of duty in:

(a) stating in their report that there was no manifest unfairness;

(b) opining that the Proposal should be put to a meeting of the Company’s creditors;

(d) failing to consider whether a trading administration or pre-packaged sale were the most realistic alternatives to a CVA.

On the facts, the only substantive issue that the court needed to address is was point b) in circumstances where the inclusion of parent IBL as a Critical Creditor was unfairly prejudicial to the landlord applicants.  In this respect, the nominee, Eddie Williams, was found to have acted in breach of duty.

Creditors which were deemed critical to the ongoing trading of the Company were unaffected by the CVA and would be paid in full in accordance with the existing contractual or other terms. They were affected by the CVA only if the entry into the CVA constituted a breach of contract, in which case that breach was waived.

All Non-Critical Creditors were entitled to be paid 7% of their “Allowed CVA Claim”, in full and final settlement of all claims.

IBL was asserted to be a Critical Creditor as it held the benefit of all trademarks and branding pursuant to which the Company traded.  A compromise, it was asserted, may have led to the termination of various franchise and other agreements which would prevent the Company from operating under its existing trade names.  The court determined that IBL should not have been treated as a Critical Creditor: there was no evidence that the franchise/licence agreements would have been terminated in the event of a compromise of the sums in question.

Similar arguments in relation to Regis Corp were not successful as there was sufficient evidence of material consequences to the operation of the Company’s business had Regis Corp not been classified as a Critical Creditor.

The applicants contended that the impairment of their leases was in principle unfair in circumstances where the Company continued to occupy the relevant premises (inviting the judge to depart from his decision in Discovery (Northampton) Ltd & Ors v Debenhams Retail Ltd & Ors [2020] EWHC 1430 (Ch) (05 June 2020)).

The argument was rejected, as in New Look, on the basis that:

The consequences following any notional termination date were mitigated by termination rights.

Reductions during any notice period were justified with reference to the comparator.

Nature and extent of lease modifications

The applicants contended that the nature and extent of the modifications to the leases were in any event unfairly prejudicial to the Compromised Landlords.

Zacaroli J did not accept that the vertical comparator test failed merely because a Company termination clause involved the release of the Company’s liabilities under the affected leases. While it is true that upon a disclaimer in a liquidation the landlord would have a right to claim damages including for the loss of future rent, that right would have been worthless in respect of the Company (or, at least, would have been worth less than the recovery which the Category 5 Landlords would receive under the CVA).

A “Profit Share Fund” was established under the CVA, into which the Company would pay 20% of the amount by which the cumulative aggregate of the net profit of the Company for the period of 2 years following the Effective Date exceeded £250,000, subject to a cap of £200,000. The fund would be shared among the Compromised Landlords and Non-Critical Creditors in proportion to their CVA Allowed Claims together with interest under s.189 IA 1986, with any surplus being repaid to the Company.

The profit share fund was found to be illusory, however its absence was not considered to be unfairly prejudicial to the compromised landlords, and nor was any other mitigating feature.

The applicants contended that the Statement of Affairs and the EOS were materially inaccurate or incomplete for three reasons:

(1) They treated two debts as valid liabilities and a Debenture as valid security, whereas the debts and the security were ultra vires and void;

(2) They failed to include any value for recoveries in respect of the Antecedent Transactions; and

The detailed arguments were framed alternatively in terms of unfair prejudice or material irregularity and were unsuccessful.

Mr Justice Zacaroli accepted Mr Arden QC’s submission for the applicant landlords that the Proposal did not comply with the Insolvency Rule 2016 disclosure requirements as it failed to disclose that circumstances existed in relation to the Debenture as a transaction which gave rise to the possibility of a claim as a transaction at an undervalue. Nevertheless, the judge did not consider that this constituted a material irregularity, as the nominee had understood the transaction to provide a genuine commercial benefit, which the judge considered to accord with the facts.

While a blanket discount across landlord claims was considered appropriate in the New Look CVA (covered here), on the facts in Regis, Mr Justice Zacaroli did not consider that a blanket discount could be justified: there was a real prospect that the formula would provide an underestimate of the Category 5 claims, where the premises were of poor quality.  The effect would be to reduce the voting power of such claims.

Mr Justice Zacaroli noted that, although it is difficult to identify precisely what percentage discount would be appropriate in this context, there has to be some adequate justification offered for such a large discount.  In this case there was none.

It was submitted that there was a material irregularity in permitting creditors Regis Corp and IBL to vote at the creditors meeting, on the grounds that the Regis Corp Debt and the IBL Debt were void as constituting a breach of directors’ duties or an unlawful return of capital.

Mr Justice Zacaroli accepted the submission that a lack of practical utility in the proceedings is a highly relevant factor, when considering whether it is appropriate to make findings of wrongdoing against persons who are not before the court and that it was particularly relevant to the present material irregularity submission and declined to determine the challenges.

While Mr Justice Zacaroli did not rule out the possibility that in cases of particularly egregious conduct a nominee might be required to repay fees, and that a power under section 6(6) Insolvency Act 1986 exists to do so, he did not think it would be appropriate (in the absence of fraud or bad faith) to deprive a nominee of fees in a case where, had he or she been sued in professional negligence, a claim to deprive them of their fees would have failed.

Zacaroli J determined that it could not be suggested that the services provided by the Nominees were valueless. Accordingly, and taking into account the limited extent to which the judge had concluded that Mr Williams’ conduct fell below that of a reasonable nominee, it was not in his view an appropriate case in which to deprive the Nominees of their fees.

Revocation is a discretionary remedy and does not flow automatically from a conclusion that a CVA is unfairly prejudicial.  The present CVA had already terminated and the only utility of revocation concerned the applicant landlord costs and limited indemnities.  Zacaroli considered the proper course was revocation, a move that additionally sends a strong message to the market.

The judgment follows the decision on another high profile CVA challenge (New Look Retailers Ltd., No. 003558 of 2020) involving high street fashion retailer New Look.  The New Look challenges were unsuccessful at first instance.  Permission to appeal the New Look decision has been granted and is discussed here.  Looking over to the Companies Act and the Virgin Atlantic restructuring plan sanction judgment (Virgin Active Holdings Ltd & Ors, Re [2021] EWHC 1246 (Ch) (12 May 2021)) contains extensive guidance on the restructuring tool introduced in June last year.  Read our commentary on the Virgin Active sanction judgment here.  The week is an unfavourable one for landlords, with Hurstwood Properties (A) Ltd & Ors v Rossendale Borough Council & Anor [2021] UKSC 16 (14 May 2021) removing a loophole for avoiding rates.

Lawyers at Irwin Mitchell have been following the proceedings closely and say the final determination in the statutory compromise cases will significantly shape the restructuring landscape.

“The analysis on voting discounts is important.  In placing a minimum value on claims, sufficient analysis will need to be applied to determine an appropriate discount.  As we saw in New Look, there are circumstances where a uniform discount will be accepted by the court, but that will not always be the case, especially as here where the lower ranking notional classes have significantly reduced reletting and profitability prospects as compared with other classes.  This area of challenge was due to bite at some stage and it is helpful to have a point of reference now.  Uniform discounting has been common practice.  That may change where there is a marked differential in financial returns across lease classification bands.

Judicial guidance on what is an acceptable size of discount is also invaluable, as there are only two cases considering this to date.”

Although CVAs and restructuring plans are two distinct legal processes, the judiciary are openly looking between them for guidance on a number of comparable aspects.  The table below sets out a very high level guide to the main points of comparison and how they were decided in the present judgments. 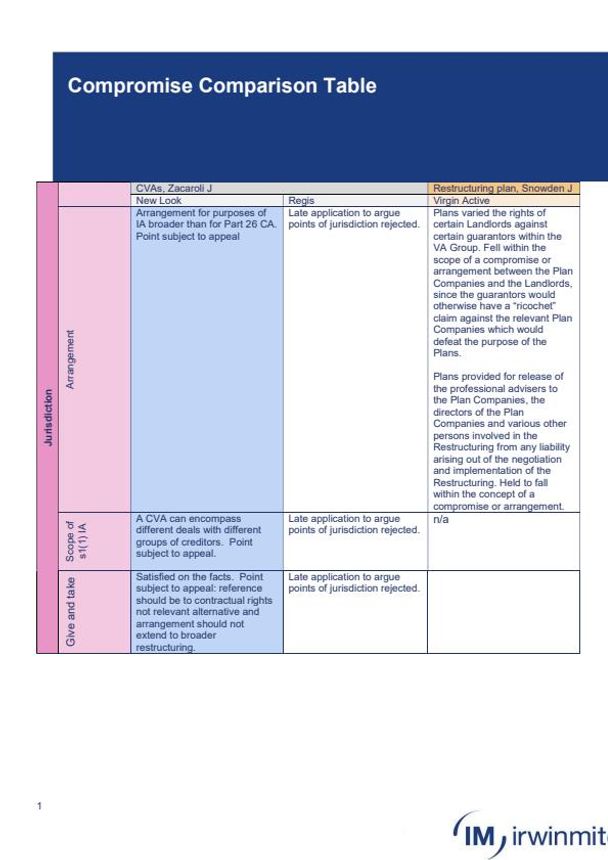