With the judgment published, the battle between the respective writers of Ed Sheeran’s ‘Shape of You’ and Sami Switch’s ‘Oh Why’ has made major news throughout its time in court. Laura Harper and Kieran Shields look at the legal issues behind the headlines.

Where there’s a Number 1 hit, there’s a number of writs

Less a cliché and more an adage, it’s true to say the more popular and successful a song the more likely it is to attract disputes over the intellectual property rights involved.

As the best selling single of 2017, and the most streamed song on Spotify ever, Ed Sheeran’s Shape of You is instantly recognisable to most people from start to finish. However, Sami Chokri (who performs as Sami Switch) and Ross O’Donoghue alleged that the now-iconic ‘oh I, oh I, oh I, oh I’ hook was copied from their song Oh Why.

The writing teams of both songs have each brought their own respective legal claims, with the Shape of You writing team and various joint parties with a corporate interest in the case (the Claimants) seeking a declaration that they did not infringe the copyright in Oh Why, and the Oh Why writing team and their corporate joint party (the Defendants) bringing a counterclaim for the alleged copyright infringement.

In support of their claim, the Defendants brought evidence of other alleged breaches of copyright by the Claimants such as an allegation that Shape of You also copied TLC’s ‘No Scrubs’, the writers of the latter appearing to have been given retrospective writing credit on Shape of You.

These claims have now been decided in the eagerly awaited and widely discussed judgement for Sheeran & Ors v Chokri & Ors [2022].

The primary piece of legislation relating to copyright protection in the UK is the Copyright, Designs and Patents Act 1988 (CDPA). The CDPA sets out a the different categories of works that attract copyright protection, the rights of the copyright owner and the acts which constitute copyright infringement as well as associated permitted acts.

s. 1 CDPA states the categories of work that attract copyright protection. Generally relevant to claims of infringement relating to songs are ‘musical works’ and ‘sound recordings’. Musical works are defined at s. 3(1) CDPA and consist of music “exclusive of any words or action”, and sound recordings are defined at s. 5A CDPA and consist of “sounds (musical or spoken)” or “all or part of a […] musical work, from which sounds reproducing that work or part may be produced”. The lyrics of a song constitute a literary work under the CDPA.

s. 17 CDPA contains the provisions relevant to infringement of a work by copying, which is the allegation in this case. It is also important to note that any copying must be “in relation to the work as a whole or any substantial part of it”. The development of the law on “substantial part” is of particular interest when considering a claim in relation to a musical work.

Lord Hoffman in Designers Guild Ltd. v Russell Williams (Textiles) Ltd. (t/a Washington D.C.) consolidated the existing case law and showed that, when deciding whether a “substantial part” of a work has been copied, the key factor is the quality of the part that is copied, rather than the quantity. Lord Hoffman also stated that the importance of the copied part should be assessed against its importance to the work that has been copied.

Therefore, the court will take a case-by-case approach and decide whether any alleged infringement is of a part of a copyrighted song that is of sufficient importance to the work to render it ‘substantial’.

However, even if one song contains an aspect of another that is the same, if the defendant did not know of the original song and did not copy it, there will not be an infringement. This defence was put clearly by Mr Justice Birss QC in Michael Mitchell v British Broadcasting Corporation as being a question of proving “if it is an independent work, then, though identical in every way, there is no infringement”.

The Defendants, by the end of their submissions, alleged that Ed Sheeran only had copied Oh Why, whether consciously or subconsciously.

In this case, it appeared to be accepted by both parties that the two songs are similar. Mr Sheeran himself, when asked whether the extract from Shape of You bore a similarity to Oh Why, replied “Fundamentally, yes. They are based around the minor pentatonic scale [and] they both have vowels in them.”

The test for copyright infringement which the Defendant’s had to prove, as established in Francis Day & Hunter v Bron in 1963, was twofold, firstly:

1) there must be sufficient objective similarities between the copyright work and the infringing work; and

2) the copyright work must be the source from which the infringing work was derived.

Some rather evocative turns of phrase were employed to try to answer those questions with Mr Sheeran being described as a ““magpie”, who habitually and deliberately copies and conceals the work of other songwriters”, an assertion rejected by Mr Justice Zacaroli.

In answering the first question, the judge discussed the similarities and differences between the two songs, agreeing with Ed Sheeran that there were “obvious similarities” at. However, when standing “back from the detail”, the judge found that the two have “points of difference” and the specific sections in question “play very different roles in their respective songs”.

The second question is of particular interest. The judge engaged in a lengthy exploration of the musical elements of Shape of You’s contentious hook, including a detailed analysis of the Claimant’s song writing process, concluding that those musical elements are a “common building block”, with examples of these building blocks being used by the likes of Led Zeppelin and Britney Spears, and so there was “compelling evidence” that the source of the hook was not Oh Why.

The judge also considered the likelihood of whether the Shape of You writing team had heard Oh Why at all, and therefore whether they were able to copy it.

Despite the Defendant’s contention that there was a deliberate effort to have Mr Sheeran and his team listen to Oh Why for promotion purposes, Zacaroli J concluded that the chances of Mr Sheeran either having Oh Why played to him due to this targeting, or discovering it for himself, was “at best speculative” and consequently the requisite causal connection could not be established by the Defendants and the claim failed.

Therefore, the judgment in this case was that the Claimants did not copy Oh Why.

The similar elements were based on musical building blocks of widespread use and it was sufficiently feasible that Mr Sheeran used these to write Shape of You without any influence from Oh Why.

This judgment should bring some level of comfort to aspiring song writers that employing a musical staple, such as a I-iii-IV-V progression, is unlikely alone to leave one open to a claim of copyright infringement. Mr Sheeran has spoken out after the judgment reflecting this, commenting that “there are only so many notes and very few chords used in pop music, coincidence is bound to happen”.

Irwin Mitchell's Media and Entertainment lawyers provide legal advice to individuals and businesses across the music, TV, film, literary, gaming and digital media industries. If you have any questions, please do get in touch.

This judgment should bring some level of comfort to aspiring song writers that employing a musical staple, such as a I-iii-IV-V progression, is unlikely alone to leave one open to a claim of copyright infringement. Mr Sheeran has spoken out after the judgment reflecting this, commenting that “there are only so many notes and very few chords used in pop music, coincidence is bound to happen”. 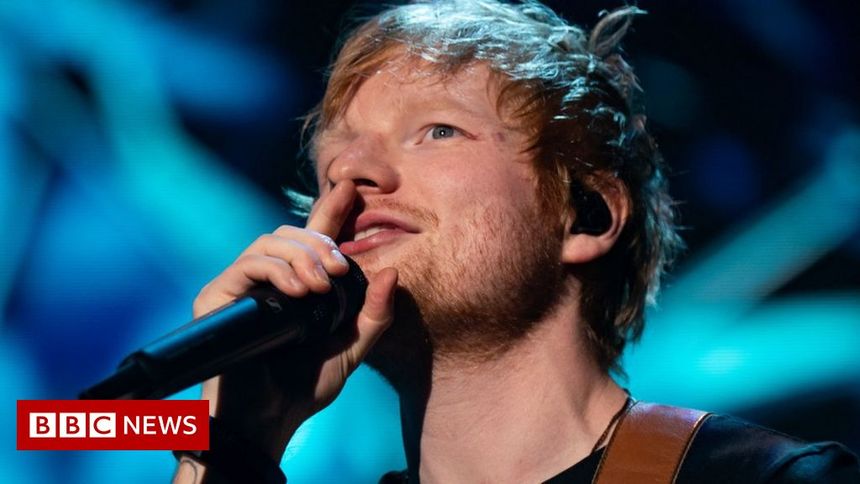