In July 2021 the UK Government committed to introduce legislation to impose a duty on employers to prevent sexual harassment at work. We explained how this might work here.

The Fawcett Society has recently published a new report detailing the extent to which women continue to face sexual harassment at work. It makes depressing reading and reveals a culture where everyday behaviour which violates the dignity of, predominantly, women, is often treated as acceptable “banter”.

It argues that this culture is reinforced by the way many employers deal with complaints: focussing on 'quietly resolving' incidents and minimising liability.

The report suggests that adopting an individualised response to an institutional problem can make things even worse for employees who report sexual harassment. Women often recognize this risk, and choose not to report at all, leading to a vicious cycle where managers and leaders do not know what is happening in their organisations, and policies sit on the shelf unused.

The report found that:

The authors recommend that employers take five steps to create a workplace that does not tolerate sexual harassment.

1. Change the culture of your organisation

Employers must challenge 'low level' sexual harassment and make it clear that there is no acceptable level of sexual banter. Staff must have confidence that your organisation will deal with complaints consistently and appropriately. You shouldn't have anyone in your organisation whose behaviour is tolerated simply because they are considered to be too valuable, or senior, to lose.

It recommends that you separate your sexual harassment policy from your general harassment and bullying policies. The policy should define sexual harassment, explain that you will take action whenever and where-ever it occurs (including when someone is working from home or during work related events), how to report an incident, how the manager will deal with it and how you will decide what sanction to impose.

But it's not enough to have a policy if it just sits on the shelf gathering dust. You must make sure that your staff know about your policy and where to find it.

Most employers understand that they need to regularly train their staff (including new starters) about sexual harassment and to explain why you expect everyone to challenge it. The Fawcett Society recommend that this includes 'bystander intervention' training to encourage people to speak up when they witness sexual harassment.

It recommends that your managers and investigators are specifically trained to ensure that they know how to deal with complaints.

4. Make it easy for staff to report incidents

It recommends that staff should be able to report incidents in a number of ways including via a specific phone line, web form or app, via an independent third party or anti-sexual harassment 'pioneer' in your organisation. Obviously, your ability to do this will depend on your size and the resources available to you.

It also suggests that staff should be able to report incidents anonymously provided they understand that you may not be able to deal with it effectively unless they are prepared to make a named report later.

All staff should be treated with respect and empathy and may need on-going support during the process. You should set out a timeframe for the investigation and keep the complainant aware of the steps you are going to take and the outcome you reach. Anyone who is guilty of sexually harassing a colleague should be disciplined.

Anyone who makes a complaint should be able to work normally.

Good action in one area helps to reinforce good action in another. We can help you design a suitable policy and properly train your staff to recognise and challenge sexual harassment in the workplace.

We can also carry out investigations into sexual harassment on your behalf. 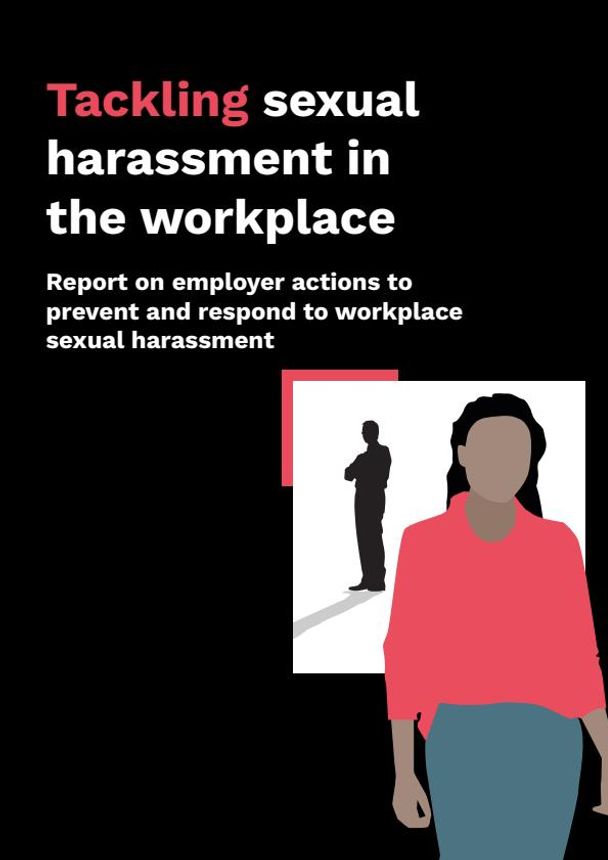