Well. That was quite the rollercoaster. Having just about caught my breath, this post is an attempt to recap all of the important events of the last week. Oh, and talk about superheroes, because quite frankly I need the light relief.

The Door at MHCLG continues to revolve...

This week saw the rise of Prime Minister Johnson and quite possibly the "most brutal cabinet purge in modern political history"*. Inevitably, this has meant yet another change of control at MHCLG - although at least the name seems to be staying for the moment.

James Brokenshire resigned as Secretary of State before Boris took the keys to Number 10. Although not before doing some fairly spectacular deck clearing (see below).  Kit Malthouse has been moved to the Home Office and now takes the role of Policing Minister.

The new Masters of the Ministry** are:

A rather useful analysis of Robert Jenrick's record on development related issues can be found here, courtesy of Planning Magazine. It is very much in keeping with the views of his predecessor, so it is possible that we may avoid a dramatic change in direction for a little while at least.

In the days leading up to his dramatic resignation, the former Secretary of State was extremely busy, as the next few entries attest.

On Monday and Tuesday, MHCLG released a raft of updates to National Planning Policy Guidance.  You can access the updated guidance below:

Of particular interest is the new guidance on "net environmental gain", which is discussed in more detail below, and the housing needs of different groups of people.

This last section, which is entirely new, urges councils to "assess the need for housing of different groups and reflect this in planning policies" and provides guidance on how best to assess need for:

I am also particularly struck by the inclusion of new and detailed guidance on the use of Completion Orders in the revised guidance on Planning Enforcement, which seems to be aimed at encouraging councils to take a more hands on approach to encouraging housing delivery.

Hedgehog Highways are to be a feature of new build housing

On Sunday, MHCLG announced more detailed guidance on how it expects developers to provide net gains for biodiversity on new developments. More information can be found here and here.

Measures are announced to 'Stamp out "Poor Doors"'

On Saturday, Brokenshire launched MHCLG's new 'Communities Framework' which contains a series of measures designed to help end the segregation of social housing residents in mixed-tenure developments. Details of the new measures, which include revamped planning guidance, and a new Design Manual, can be found here.

The design and management of affordable housing units is largely dictated by the housing associations that run them*!. Developers, as a rule, only build units that they know Registered Social Landlords will be willing to take on.

It will be interesting to see whether the increased integration of affordable housing units into the wider development has any impact on their attractiveness to the organisations responsible for managing them.

New Planning Fees Order is made by Parliament

On 22 July, Parliament officially made a new Planning Fees Order, the text of which can be found here.

The big take away is that from 19 August 2019, there will be  a £96 fee for applications for prior approval for permitted development rights for a larger single-storey rear extension to a house.

Earlier this week, MHCLG wrote a long letter to local authorities, which included an announcement that:

When the results of this research is announced, we may find out precisely how much unspent CIL funding is still floating around the system. I suspect it may be quite a lot.

In my favourite story of the week, the Times has reported on a fun little fight that is currently going on in Waverley. The District is currently playing host to Marvel Studios, who are in the process of filming the new Black Widow Movie.

Unfortunately filming at Hankley Common, has raised the hackles of the local parish council. The issue, according to the Times,*^ is that the sets are being built before the council has determined the studio's application for temporary planning permission. A state of affairs which has led the Parish Council to Hulk Out and write what can only be described as an extremely stroppy letter to the Local Planning Authority.

My favourite extract reads as follows:

“This application is shown as ‘pending decision’ when the works have already commenced and will be completed before a decision is made, rendering the time comitted by WBC to considering the application apparently redundant.

“It would also seem there is no merit in asking the parish council to comment when their comments are completely irrelevant. The planning process has not been followed.”

Unfortunately for Thursley Parish Council, I suspect that this fight  is one that they are not going to win.... After all, you need more than a strongly worded letter to defeat one of Earth's Mightiest Heroes.

* according to the Times, anyway

** A phrase I am quite proud of! Please feel free to borrow it.

*! A topic I covered in more detail in an earlier post

*^ Link to article below. It is very much worth a read.

For the makers of the forthcoming Black Widow film, starring Scarlett Johansson as the Russian spy and martial arts expert, their nemesis comes in the form of Thursley parish council. The parish council .... has written to Waverley borough stating that Marvel is building the set on Hankley Common, southwest of Guildford, before permission has been finalised, making a mockery of the planning process. ..... A Waverley council spokesman said: “The planning application is under consideration and there will be no decision on this until at least August 2. The agent for the application has been contacted to remind them that any filming which takes place outside of a planning permission may represent a breach of planning control and may be subject to enforcement action.” 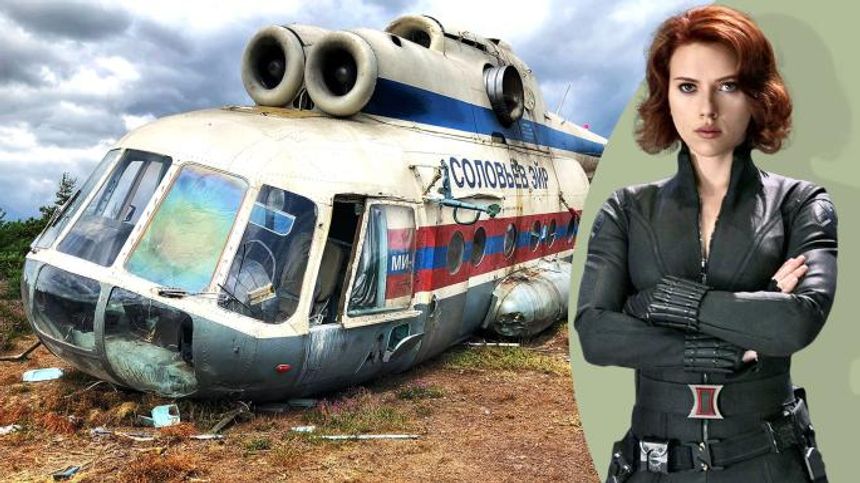