The term “Wagatha Christie” was coined in October 2019 when Coleen Rooney’s explosive social media posts firmly pointed the finger at Rebekah Vardy, accusing her account of leaking private stories about Coleen Rooney to the Sun newspaper.

The history of this feud is well known to most, but by way of brief recap, Coleen Rooney is said to have suspected personal stories were being leaked to the press by Rebekah Vardy, and set up a trap on Instagram whereby she posted false stories on her personal Instagram account having blocked everyone bar Rebekah Vardy from being able to see her stories. 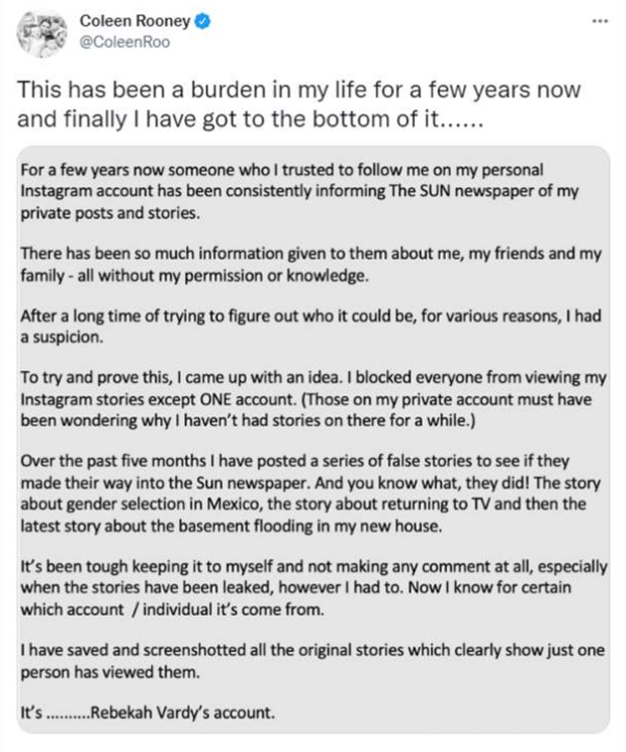 Rebekah Vardy did not take kindly to the allegations and sued Coleen Rooney for defamation in a case which captivated social media and the gossip pages of the press.

Judgment was handed down at noon today and found in favour of Coleen on the basis her publication was substantially true and therefore not defamatory of Rebekah Vardy.

The judgment of Mrs Justice Steyn said it was "likely" that Rebekah Vardy's then-agent, Caroline Watt, "undertook the direct act" of passing the information to tabloid newspaper The Sun and Rebekah  Vardy knew of, and condoned this behaviour, actively engaging in it by directing Caroline Watt to the private Instagram account, sending her screenshots of Coleen Rooney's posts, drawing attention to items of potential interest to the press, and answering additional queries raised by the press via Caroline Watt,"

At the trial, Rebekah Vardy was questioned about ‘a series of unfortunate events’ which led to various WhatsApp messages between her and her agent Caroline Watt being unavailable and Caroline Watt accidentally dropping her phone in the North Sea.

In relation to this evidence and Rebekah Vardy’s testimony, Mrs Justice Steyn concluded:

“the improbability of the losses occurring in the way they describe is heightened by the fact that it took the combination of these improbable events for the evidence to be unavailable… In my judgment, it is likely that Ms Vardy deliberately deleted her WhatsApp chat with Ms Watt, and that Ms Watt deliberately dropped her phone in the sea."

Mrs Justice Steyn also noted Rebekah Vardy’s choice not to call her agent, Caroline Watt, to give evidence was striking and found significant parts of Ms Vardy’s evidence was not credible.

Defamation is the publication of an untrue statement that has caused or is likely to cause serious  harm to your reputation.

To be successful in a defamation claim, the claimant must prove that the meaning or imputation of the statement or words complained would tend to have a substantially adverse effect on the way right-thinking members of society would think of the claimant.

The remedies available in a defamation claim include an apology from the defendant, as well as damages by way of compensation for any distress or humiliation caused.

The current maximum sum that a successful claimant can be awarded in a defamation claim in England and Wales is £300,000.

It should be noted that the purpose of a defamation claim is to redress the impact on reputation, and thus the damages appear low in comparison to other litigation claims, however the apology is deemed to be the main remedy in such cases.

Vardy’s decision to bring a claim for defamation of her character has spectacularly backfired.

The ruling that Rooney’s statements about Vardy were substantially true, is a PR disaster for Rebekah Vardy.  The decision to bring a defamation claim is not one to be taken lightly, sometimes more so, where the parties have celebrity style status and the stakes of the court of public opinion are high.

The Judge concluded that Vardy’s evidence should be treated with extreme caution and that there were significant parts when it was inconsistent, evasive and implausible and that the loss of evidence of certain unavailable evidence was deliberate not accidental.

The Judge’s comments about Vardy’s evidence were damning, ultimately questioning her truthfulness and in consequence, hugely damaging to her reputation.