This year, the theme for International Women's Day was #breakthebias. The campaign asked employers and allies to cross their arms in solidarity to call out gender bias, discrimination and stereotyping to 'forge women's equality'. Many did so. Twitter was full of businesses celebrating the contribution women had made to their success and, in many cases, using it as an opportunity to sell products to them.

In response, the 'gender pay gap bot' (which quickly accumulated nearly a quarter of a million followers) put out a direct message to employers: if they tweeted about International Women's Day, it would retweet their gender pay gap figures. And so it began. Scores of companies were shown to pay women less than they paid men (based on median hourly pay). There was no context - just the data. And consumers reacted angrily and bluntly told them to do better, although often in more colourful language. Some organisations were so worried about the damage to their reputation, they deleted their original tweets.

The bot's tagline was lifted from the suffragette's slogan 'deeds not words'. It's message to employers was don't brag about how you are supporting women in your workplace if you've still got a gender pay gap.

But is it that straightforward?

The gender pay gap has deep roots. It was usual for women to be paid less than men in the 60's and 70's. At that time women's work was generally considered to be less important than work performed by men and that bias was reflected in their pay packets. Whilst that view hasn't been completely eradicated, there has been substantial change, linked to the fact that over the past 40 years, the UK has seen an almost continual rise in the proportion of women in employment.

Having a gender pay gap doesn't mean that you are paying men more than women for doing the same or similar work (which is unlawful). If you do, it will result in a gap, but there are likely to be other, societal reasons that explain the disparity. According to Alex Bryson, professor of quantitative social science at UCL, there's evidence that women go into the labour market more highly qualified than men which suggests they ought to be paid a premium. But even where they start their careers earning as much as their male counterparts, as they take take time out of the labour market to look after children, their wages start to fall behind (a point also made just last week by Professor Alice Sullivan in response to comments that there was a 'parenthood' rather than a gender pay gap).

The fact remains that women are prepared to accept lower pay for the flexibility they need to balance their work and home lives. In doing so they lose out on promotions and their earnings increase more slowly than men's. This is particularly pronounced in professions where presenteeism is taken as the yardstick to measure productivity.

The rate of progress is extremely slow. The introduction of the Equal Pay Act in 1975 led to a step change in closing the gap by 10%. But since then the rate of convergence is around a half a percentage point per year. And at that level, it will take almost 40 years to achieve equalisation. That's clearly not good enough.

In 2017 the government introduced laws which required organisations employing 250 or more employees to publish their gender pay gaps on a website set up for that purpose. It hoped that opening this issue up to public scrutiny would encourage employers to close the gap more quickly. The media expressed some interest when the first figures were published (and some MPs called on consumers to boycott businesses with large gender pay gaps) but this has tailed off. The emergence of the equal pay bot has pushed this issue back into the news cycle and it aims to keep it there. One of its founders, Francesca Lawson told the Huffington Post:

"We created the bot is to make sure that this data isn’t just forgotten about – it’s in the spotlight. By talking about it, we can begin to put pressure on employers to start changing their hiring practices, and paying everyone more."

Having a gender pay gap, particularly if its significantly higher than the national median average of 15.4% in 2021 for all workers, will cause reputational damage to organisations who don't improve. It may damage consumer confidence and make it more difficult to attract the most talented people to your organisation. Recruiters tell us that many candidates are factoring in the environmental, social and governance credentials of potential employers before deciding to accept a job. The gender pay gap statistics are a matter of public record and candidates can easily check how well the company they are thinking of joining is doing - and, in particular, if they are improving. They will also check its website to see if it includes a narrative to explain what steps it is taking to eliminate the gender pay gap.

Businesses that have a transparent pay structure may also fare better than organisations that don't. That way candidates (and existing staff) know what they need to do to progress to the next level and how much they will be paid if they do.

One other point. If the gender pay gap is linked to perceived stereotypes about productivity (as suggested by Professor Alex Bryson) those organisations that have introduced hybrid or flexible working should be able to make improvements quickly. The COVID-19 pandemic has seen a huge shift in how and when both men and women work. That should help to break down these types of stereotypes and help businesses assess productivity based on evidence not gender based prejudice.

Do you want to improve?

We're holding a free online HR conference on Wednesday 16 March to discuss the 'Great Resignation' and the challenges this poses for employers wanting to attract, support and retain their staff.

There are four sessions (you can chose to attend some or all of these). You'll hear from industry experts as well as our legal team. To sign up, click here. 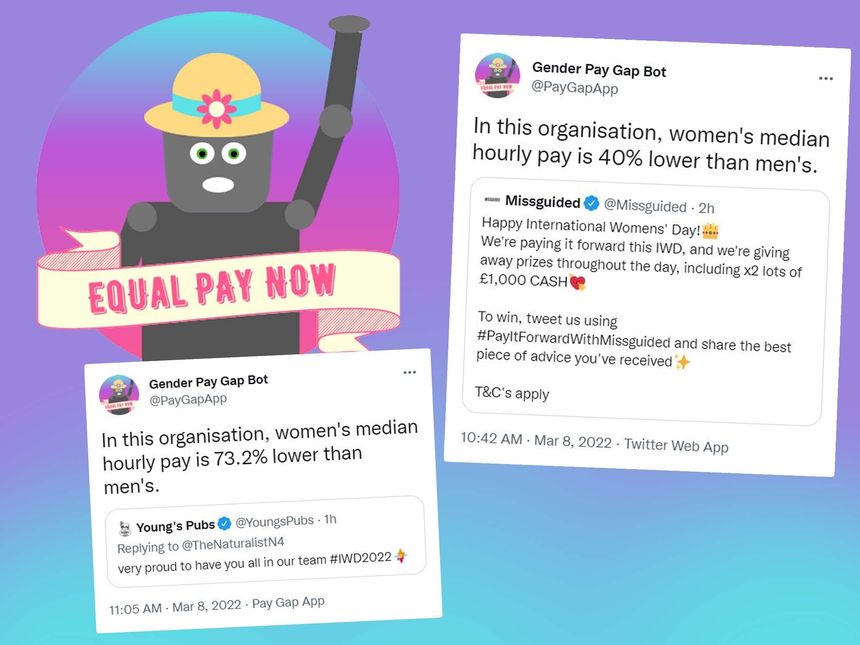