The fact that planning reform was going to feature in the Queen's Speech was hardly a surprise to anyone who listened to the news, or picked up a paper, over the weekend.  The headlines had been 'pre-announced' and widely reported on.

In fact, the press reports have been somewhat more detailed than the speech itself, where the forthcoming planning bill got the following mention:

" Laws to modernise the planning system, so that more homes can be built, will be brought forward; along with legislation to end ground rents "*

The Environment Bill also made a re-appearance as did a pledge to improve national infrastructure, including bus, rail and broadband connectivity; and a commitment to freeports.

Given the fact that approximately 30 pieces of legislation were announced in a speech that lasted about ten minutes, the brevity is also hardly surprising.

It is a packed legislative agenda for the course of one parliament, and contains a number of  manifesto commitments that the Government has yet to deliver on - including major reform of our social care system. Given the limited amount of parliamentary time available, and the fact that the Government still has Covid-19 recovery plans and Brexit fall-out to deal with, it is unlikely that the Planning Bill will appear much before the Autumn.*!

Whilst the Queen's Speech may have been a guide to the Government's aspirations for the coming year; perhaps a more reliable sign of their immediate priorities can be found in the large number of documents that MHCLG published yesterday.

The detail hidden in this 'data-dump' is actually rather revealing; given how closely it ties into both the 'levelling-up agenda' and the prospect of future planning reform.

For a start, it looks as if the Building Safety Bill, which was also part of the Queen's Speech, will appear pretty darn quickly. The draft legislation (from a planning perspective at least) was published yesterday, and is due to come into effect on 1 August 2021 (subject to parliamentary scrutiny).

The new building safety legislation is significant as it will bring fire safety matters (which were previously governed by Buildings Regulations) into the planning system for the first time. The intention is to amend The Town and Country Planning (Development Management Procedure) (England) Order 2015 (as amended) and related legislation in order to:

The detail of the legislation, and the guidance as to what should be included in the fire statement, are set out in the above link and are well worth reading in full.

This is intended to be the first of three fire safety 'gateways' which flow through from planning to final completion certificate for the development.

MHCLG also intends to bring fire safety considerations into the prior approvals process for permitted development schemes; but the required amendments to the GPDO have yet to be published.

The Neighbourhood Planning Update is also very interesting as it signals a big push towards encouraging more neighbourhood planning, ahead of the release of a reform bill which, if we are to take the white paper and the weekend's briefings at face value, could significantly undercut the role of local involvement (and neighbourhood plans) in the overall planning system.

There are also some real tensions between the measures announced in the update (see below) and the introduction of 'Class E' into the use classes order, last summer, and the proposed permitted development right to move from 'Class E' to 'Residential' which is also due to come into effect on 1 August 2021.

The Update includes details of:

If nothing else, this seems to indicate that MHCLG has yet to figure out how to 'square the circle' between a real desire to increase housing numbers, and reduce NIMBY-ism, and its ongoing political commitment to localism.  If left unresolved, this is a tension which could de-rail the plans for significant reform of the planning system before they get going. If the fallout from the 'Mutant Algorithm' rebellion has taught us anything, it is that  there is nothing like a loss of local control over housing decisions to inspire a wide-spread revolt on the conservative back benches....

* This quote may not be entirely accurate - I haven't kept my audio- typing skills up to date over the last 15 years or so**.....

** yes, I did watch the opening of parliament live. No, I do not have anything better to do today. My other plans include baking a banana cake and taking a nap.

The speech is also expected to reference new Planning Bill to deliver a hotly contested overhaul of the planning system in England. The government unveiled proposals last summer to replace case-by-case assessment of planning applications with a new zoning system. Ministers say the changes will speed up the planning process and help councils to meet new house-building targets. But Labour criticism that communities would be sidelined has been shared by many Conservative MPs and councillors. 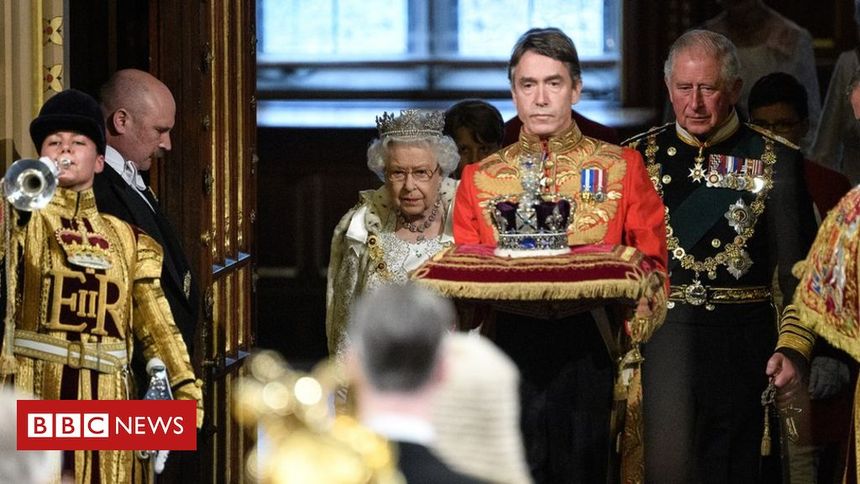