Prime Wardrobe is one of many exciting new developments within the world of online retail, but is the law keeping up? Katherine East, a specialist lawyer at Irwin Mitchell, explores the issue and considers how consumer rights law might be lagging behind.

At school, being called ‘disruptive’ was an accusation which usually preceded an unfavourable outcome – detention, a call to your parents, or just a raucous telling off.

Fast forward to life in the business world, and here being a ‘disruptor’ has become quite the accolade. Take, for example: Uber – which has changed the way we order taxis forever; Deliveroo – which changed takeaways from a Friday-night treat to an online, anytime buffet; and Apple – which changed mobile phones from devices you could make calls on (and play Snake) to portable, hand held computers, for which making calls is now, really, a secondary function.

One thing that most of these big-time disruptors have in common is that they don’t rest on their laurels. They keep on disrupting, always on the search for the next revolutionary product. Apple didn’t just make the iPhone, it met needs we didn’t even know we had by launching other products, such as the  Apple Watch, and functions, such as Apple Pay, and made them all seamlessly integrate (both together and into our everyday lives).

One company which deserves a place in the disruptor hall of fame is Amazon. Having started as an online book store in 1995, Amazon is now the world’s largest online retailer, claiming to sell every consumer product you could need (hence its logo, with an arrow spanning from the “A” to the “z”).

As with the other big-time disruptors, Amazon continued to create revolutionary products, branching out into digital streaming services (Prime Video and Music), electronic devices (Kindle and Fire TV), as well becoming a prominent player in cloud services and artificial intelligence.

It is estimated that Amazon now employs over 560,000 people worldwide, with an annual turnover in 2019 of $280.552 Billion (estimated to increase by nearly 40% in 2020 due to increased online purchasing as a result of the COVID-19 pandemic). To put that into context, in 2018, it was estimated that 49% of all US online retail spending was on Amazon, equating to 5% of all retail spending across the entire county. Not bad for a company which started life in Jeff Bezos’ garage!

Amazon’s latest venture is into the fashion industry, starting with Prime Wardrobe - its answer to the online retail conundrum which means that customers have to order items, part with their money, and then wait up to 10 days for a refund on any items they choose to return. This has become an ever more prominent issue this year where, in the UK at least, the majority of physical retail outlets have been closed for months at a time due to Government restrictions imposed to curb the spread of COVID-19.

Prime Wardrobe allows Amazon Prime members to order up to six items from a broad range of clothing and footwear, and try them on at home without needing to pay for the items up-front. Customers have seven days to try on the clothes and return them (with pre-paid return postage), only then paying for the items they choose to keep. Even once the customer has been charged for the items, they will have 30 days to obtain a full refund if they choose to then return them.

Latterly, Amazon has begun offering a “Personal Shopper” service at an additional premium, whereby Amazon will send customers a monthly clothing box specially curated for each individual customer and their unique style. The service is not yet available in the UK (and is limited to the US for now – having only just expanded from solely women’s wear into men’s wear), but the terms are the same as for Prime Wardrobe – the customer has seven days to return the item without being charged, and 30 days to return even once they have been charged.

So how does all of this stand legally? Well, law is traditionally reactive – it is implemented to solve an issue, rather than predict one. Huge advances brought about by disruptors and innovators usually pre-date the law which is then introduced to regulate those advances. Take, for example, social media platforms such asFacebook, Instagram and  Twitter and the recent calls for greater regulation of the way that they handle the dissemination of news (or fake news, as the case may be).

At present, online consumer retail in the UK is largely governed by two pieces of legislation – the Consumer Contracts (Information, Cancellation and Additional Charges) Regulations 2013 (the “Regulations”), and the Consumer Rights Act 2015 (the “CRA”).

Under the Regulations, a consumer has the right to cancel an online purchase at any time from the moment they place the order, up until 14 days from the date they receive the goods. If the order is made up of multiple goods, the 14 day period runs from when the final item is delivered.

This 14 day period is the time by which the consumer has to decide whether to cancel, they then have a further 14 days to actually send the goods back, and they should then receive a refund within 14 days of either the trader receiving the returned goods back, or the consumer providing evidence of having returned the goods, whichever is the sooner.

The trader must also refund to the consumer their basic delivery costs, but not any additional costs associated with an optional, enhanced delivery service.

The Regulations do not legislate for the model which Amazon Wardrobe operates under, whereby the consumer pays nothing until it decides to keep the products (presumably with deemed acceptance after seven days, in the absence of an actual decision). On the face of it, Amazon Wardrobe actually provides consumers with rights over and above those in the Regulations.

Where matters might become slightly trickier is in respect of the quality of the goods, as Amazon Wardrobe’s terms state that the clothes must be unworn and undamaged when returned. The CRA states that the trader is responsible for the condition of the goods until they are received by the customer. “Receipt” is a more fluid concept when payment is taken a week after the product is physically provided to the customer, and proving the state of the goods upon receipt is always going to be difficult, for both the trader and the consumer. Usually, to avoid the potential for reputational damage, it is the trader which bears the costs if a consumer claims that the goods were damaged on arrival.

As with most revolutionary product offerings, it is likely that the law will not be required to “catch-up” with the advancement until issues are encountered in practice. 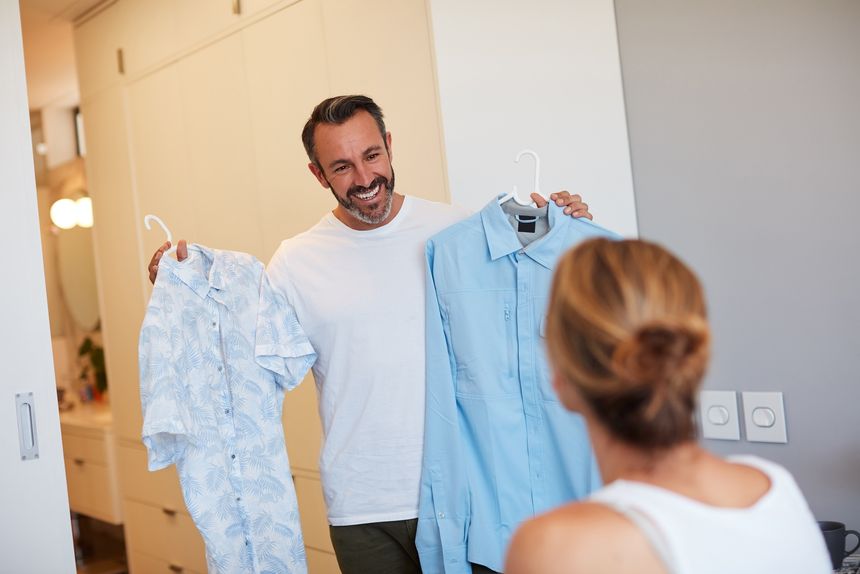