You'd think the answer to this is a definitive 'yes'. However, the Scottish EAT's decision in K v L reveals how difficult it is for schools/colleges to resolve the tension between balancing their statutory duty to safeguard the children/students in their care with the need to act fairly in employment law.

Mr K was an experienced teacher who had worked in Scottish schools for 20 years. He had an umblemished record. He was suspected of possessing indecent images of children on his home computer and was suspended. Mr K was interviewed at a police station (along with his son) and both men were subsequently charged. However, they both received a letter from the prosecutor which said it had decided to take 'no further action' although their cases would be kept under review.

The school, as part of its investigation, asked the Crown for details of the information it had against Mr K to help it decide if he posed a risk to children in their care. They received a redacted copy of the summary of evidence. However, the entire paragraph summarising the evidence was blanked out and the Crown said that it couldn't give a view on whether Mr K was a risk to children. [For some reason, the school's HR adviser didn't share this evidence with the Head (who was helping to conduct the investigation) or to the person who chaired the disciplinary hearing.]

During the school investigation, Mr K admitted that the police had found illegal images on his computer. But, he said that the computer was only used as a 'back up' and wasn't in use at the time it was seized.

Mr K was asked to attend a disciplinary hearing. The letter cited his involvement in a 'police investigation into illegal material of indecent child images on a computer found within your home and the relevance of this to your employment as a teacher'. Mr K denied downloading the images and said that other people (including his son and his son's friends) had access to it. Mr K's solicitor gave evidence about what 'no further action' could mean in the context of a criminal investigation.

The disciplinary decision maker took the view that there was insufficient evidence to conclude that Mr K was responsible for downloading the images, but she decided to dismiss him because: 1) he presented an unacceptable risk to children: 2) the school could suffer reputational damage if the public ever found out about the allegations against Mr K and the fact it had continued to employ him; and 3) there was an irretrievable breakdown of trust and confidence between the parties.

The EAT in Scotland concluded that Mr K should have been informed, at the outset, of the allegations against him. Referring to reputational loss "in passing" during the hearing wasn't good enough. Mr K thought the complaint was about his conduct - and didn't have the opportunity to mount any defence to the actual ground the school relied on to dismiss him. This inevitably, meant that Mr K had been unfairly dismissed.

Implications for schools and colleges

Situations like this put schools/colleges in an almost impossible situation. They have a duty to safeguard the pupils in their care and, won't want to retain anyone that potentially poses a risk to them. Imagine the furore if a member of staff is suspected of sexually assaulting a child/student and it later emerged that a school/college knew of earlier allegations and had decided to keep them on.

The fact is schools/colleges can't compromise their safeguarding duties and will have to make difficult decisions. The EAT said that employers can't fairly dismiss someone because they 'might have' committed the offence they are accused of and must decide, on a balance of probabilities, if it did happen. In reality, if you are worried that there's even a remote chance that the allegations are true, an unfair dismissal may be the lesser of two evils.

If you are in this situation, we recommend that you consider the following:

1. If you frame allegations as misconduct, you will not be able to fairly dismiss anyone if you have no evidence beyond the fact that they have been charged. In most cases you won't want to wait until the trial as delaying making a decision can undermine the implied duty of trust and confidence and give the employee the opportunity to resign and claim constructive unfair dismissal. It's also an expensive option as you will have to continue to pay them during their suspension.

2. If you rely on the potential reputational risk to your school/college make this clear in the allegations. If you decide to dismiss, it will be for 'some other substantial reason'.

Leach v The Office of Communications is one of the leading cases on reputational damage and demonstrates that a dismissal can be fair, even if the conduct giving rise to the reputational damage is disputed by the parties.  In that case, the employer was told by the police that Mr Leach posed a serious threat to children (they believed he had sexually abused children in Cambodia). His employer was concerned that if the allegations against him turned out to be true and became public knowledge, they would suffer reputational loss if they continued to employ him. It also said he should have told them about the allegations against him and that this had damaged the relationship of trust and confidence between them.

The Court of Appeal acknowledged these cases are difficult for employers. It said:

" It sticks in the throat that an employee may lose his job, or perhaps in practice any chance of obtaining further employment, on the basis of allegations which he has had no opportunity to challenge in any court of law - or may indeed have successfully challenged. On the other hand, it has to be recognised that there are cases where it is necessary for employers to be warned of facts which indicate that an employee (or potential employee) is a risk to children, even in the absence of any conviction."

It said that employers will only be acting reasonably if they critically examine the information provided by a third party such as the police. In this case, the employer had been entitled to treat it as reliable and Mr Leach's dismissal was fair. 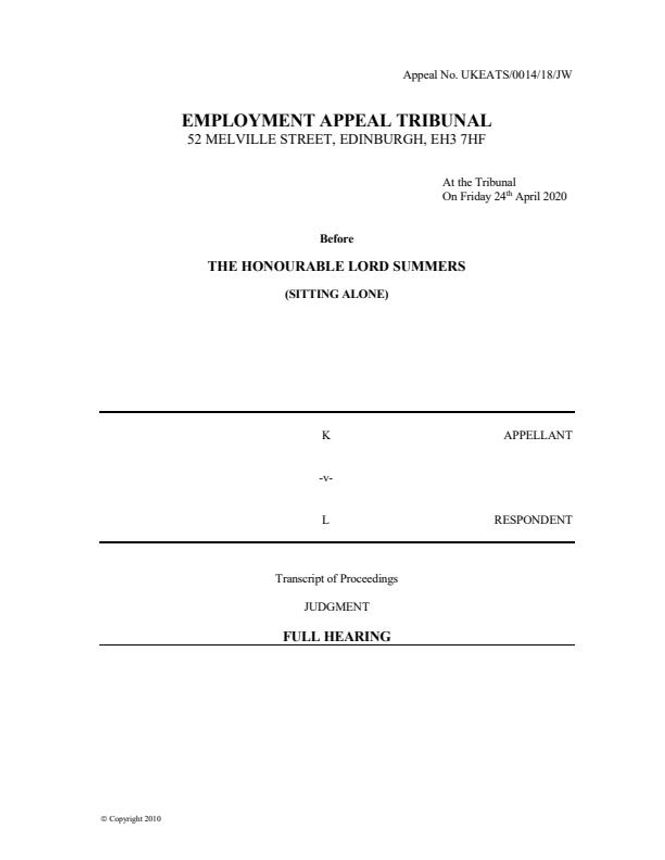