The clever science boffins are still rushing to create a vaccine and/or a cure for the coronavirus which is bringing the world to a halt.  It probably won't be this guy, but fingers crossed for #science.  Jonathan Easton (barrister) recently shared a post on Enforcement immunity periods on Twitter and Linkedin which got me thinking about planning immunity.

We have been in official lockdown since 23 March 2020.  As of 10 May 2020 we are officially on the road map out of lockdown; but Phase 1 of the road out of lockdown does look very similar to lockdown itself, particularly for businesses and the High Street.

This has already been a 7 week period. Unofficially it has been longer with the official guidance to work from home beginning on 16 March 2020.  Pubs and restaurants noted a drop in footfall from the advice to stay away from public places for at least two weeks prior to this resulting in changes to PD rights being drafted well before the official lockdown and coming into force on 24 March.  Whilst we remain in some form of lockdown the following thoughts remain relevant.

s.171B TCPA 1990 provides for three different immunity periods from a LPA taking action for a breach of planning control. These are: -

Operational development is factor of its own - if you build it; and four years later it is still there then it (subject to many caveats) will have become immune from planning enforcement.  Changes of use and other breaches of planning (generally speaking breaching express planning conditions) will be a different matter.  It may be more difficult for those breaches to subsist; single dwelling houses aside - #stayhomesavelives.

A continuity of breach is required.  s.171B TCPA did not expressly require that the unlawful use should have been continuous; the law simply says that a breach is immune 10 years after it began.  The requirement for continuity is a creature of caselaw.

Thurrock BC v Secretary of State for the Environment [2002] JPL 1278 asked whether enforcement action could have been taken at any time within the ten year period and within that, concluding that it would be "a nonsense for a LPA to issue an enforcement notice to require a sleeping use to stop”, but a matter of fact and degree whether a use is an “active use” or not."  It should not be confused with the case of Panton and Farmer v Secretary of State for the Environment, Transport and the Regions and Vale of the White Horse District Council [1999] JPL 461 which concerned in which order the time periods should be approach and how a continued, immune, lawful use could be abandoned.

So what happens if your unlawful business, holiday let, or countryside race track etc had not acquired immunity before early March and has then not been able to hold any events since then until (we hope) mid June at the earliest?

Jonathan points out that this is not dissimilar to the foot and mouth outbreak (2000 - 2002) discussed in Miles v National Assembly for Wales [2007] EWHC 10 (Admin) in which there was no use of the land for motorcycling activities for about 18 months due to the outbreak of foot and mouth disease.  The Miles case found that: -

I would argue that, thus far, the current crisis is a very different. Countryside uses are not the danger in the way they were during the foot and mouth outbreak.  If anything they are the release&%&*.  Our human need to gather in crowds is the danger.  The lockdown means we cannot travel a significant distance to use such motorcycle tracks or do it in a significant crowd.  It remains safe and legal for the landowner and his immediate family to carry on using those tracks.  That simply was not the case in 2001.

So two things are different.

We are currently looking at a 3 month break (fingers crossed) not an 18 month break and city uses are more at risk than countryside ones.

Dan Matthewman was quick to highlight the Westminster City Council v Secretary of State & Cordani [2013] EWHC 23 (Admin) which emphasised that "continuous" was put in context as meaning "without material interruption".  In Cordani a pavement café where the tables and chairs were taken into the restaurant each night when the restaurant closed had not suffered a material interruption in the continuity of the use of the land.

Will the likely 3 months be a material break in continuity?

You would argue this is going to be case specific in every case and relative to how much of the breach remains despite the non-activity in the breach.  There will be a difference between an unlawful cafe, still laid out as a cafe, and an unlawful street cafe with no chairs laid out at all between March and June.  This will be different again if it was only ever a seasonal street cafe.

Thoughts?  How to protect your breach?

Building on that and specifically then, my thoughts: -

In any event, the change in circumstances of those breaches is likely to be different in each case; each use will be different and should be analysed very specifically.

&%&* for which see this weeks picture for "views from my lunchtime walk, which at 1430 I've left a bit late today" - if you squint you can just about see Drayton Manor.

“continuity” for these purposes does not necessarily mean that the land must have been used for the activity in question on every single day during the relevant period. For example, it might have temporarily stopped during a weekend or holiday. 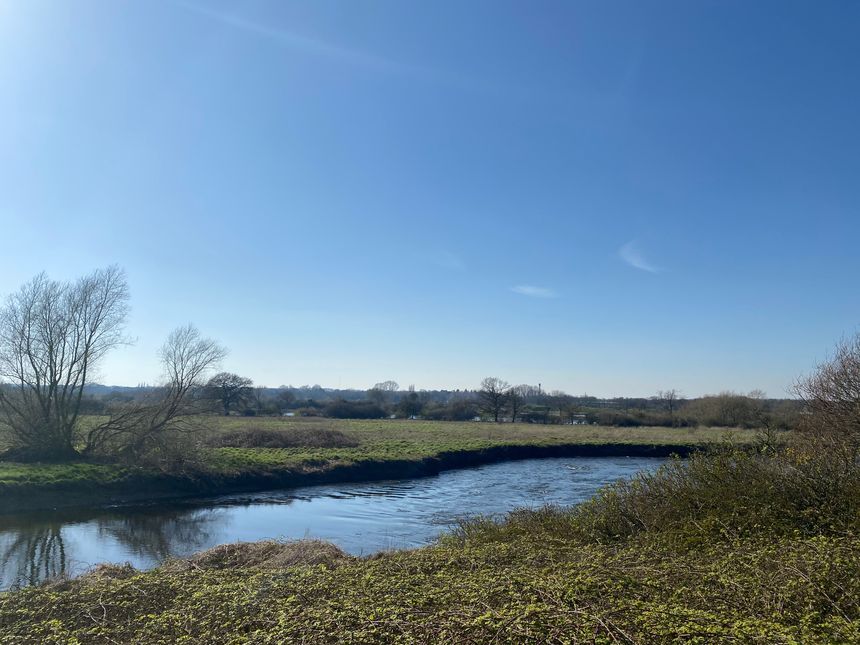