By Rob Coleridge and Amelia Darbo

The importance of compliance with the Groceries Supply Code of Practice (GSCOP) has been reinforced this week with the recent news that the Co-operative Group Limited (Co-op Group) has been found in breach of GSCOP.

The Co-op Group failed on two GSCOP offences; namely, it did not provide reasonable notice to suppliers regarding decisions to de-list products, and it had varied supply agreements unilaterally (and without reasonable notice in the way it applied its depot quality control and benchmarking charges). Such charges presented difficulties for suppliers on fixed-cost contracts, as there was no flexibility to amend their cost prices to reflect increased costs from the charges applied by the Co-op Group. This reveals a fundamental flaw in the Co-op Group’s governance structure and in the Group’s legal, compliance and audit teams to monitor compliance with the code.

The news was published after a 12-month investigation into the retailer’s treatment of suppliers; the first of its kind since Christine Tacon, the Groceries Code Adjudicator (GCA), acquired the right to fine qualifying retailers for breaching GSCOP. The Co-op Group were at risk of being fined up to 1% of their turnover, representing approximately £70m, given the turnover of their food retail arm was £7bn in March 2017 (such figures being prior to the acquisition of Nisa Retail Limited).

Fortunately for Co-op, the retailer group was ordered to pay £1.3m in costs rather than being fined, and was told to make urgent, significant changes to their governance, systems and processes. The GCA also recognised weaknesses in the Group’s IT systems to further facilitate compliance with the code, which she advised should also be rectified.

Since the investigation commenced, the Co-op Group have taken positive action by training over 1,000 employees to embed the culture of code compliance, by launching a dedicated helpline for suppliers to raise questions and by introducing a new supplier charter setting out new policies and processes to ensure code compliance is practiced. The supermarket group has also refunded £650,000 and issued a formal apology to suppliers that were negatively affected.

The GCA is an independent regulator that monitors malpractice by large supermarkets to ensure they treat suppliers fairly. This order by the GCA is a positive sign for suppliers, as supermarket compliance with GSCOP is likely to be taken more seriously in the future. Similarly, this result echoes the importance of the need for improvements in training and clear policies for buyers, employees who deal with suppliers and suppliers themselves, to understand their rights and responsibilities under GSCOP.

The Adjudicator publishes her report into the compliance of Co-operative Group Limited with the Groceries Supply Code of Practice. 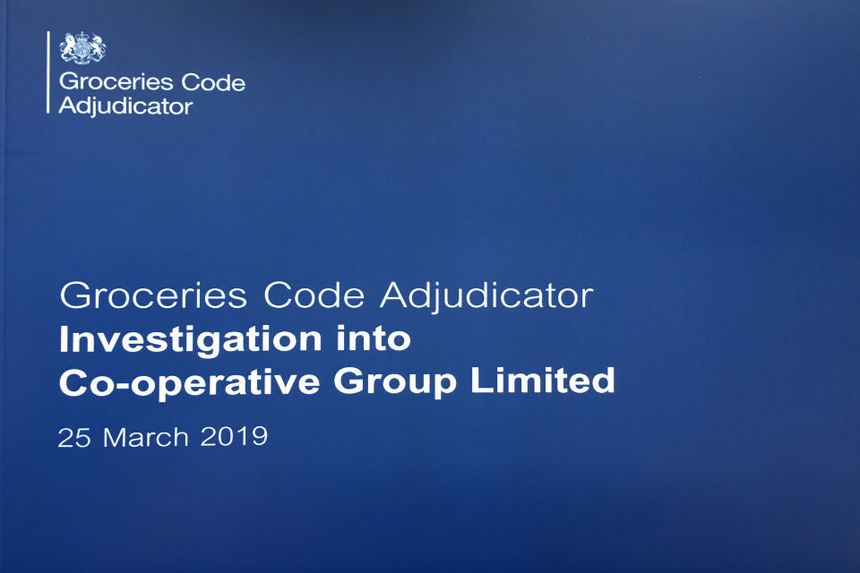