I can never resist a good 'planning vs cultural icons' story.* This week's contribution comes from sunny California, and just goes to show that these types of 'planning vs popular culture' problems are not limited to the UK.

At the centre of the controversy is the 'Flintstone House', pictured below, a piece of 1970s experimental architecture that may well have been listed if it had been built in the UK. The house was built by architect William Nicholson in 1976, using an experimental technique that involved spraying concrete to create curved walls.

By all accounts, the neighbours had never been overly fond of the unconventional property. The real problems, however, began in 2017 when the new owner of the property started to capitalise on the prehistoric resemblance and began a series of Jurassic Park themed home improvements.

In the last three years, Ms Fang has introduced a series of giant dinosaur statutes into the grounds of the house. In a truly inspired moment, she also installed a large, multi-coloured sign reading 'Yabba Dabba Doo".

Her neighbours complained to the local council, and Ms Fang is now facing a lawsuit claiming that her decorating choices are a public nuisance. Apparently, she failed to obtain the correct permits for introducing a menagerie of dinosaurs into northern California.

I have no idea how this is likely to turn out for Ms Fang. Unlike her neighbours, a quick straw poll in our office revealed opinion was broadly in favour of her eclectic tastes in landscape gardening.

My favourite response came from Erica Snellgrove, our current trainee, who said "I’m just disappointed this is Hillsborough, California and not Hillsborough, Sheffield…" Perhaps, if the Court finds against her, Ms Fang could consider emigrating....

The “Flintstones” home in northern California appears to take its architectural cues from the town of Bedrock. The experimental house was built in the 1970s using a technique that involved spraying concrete to create curved walls. The result is a building where Fred and Wilma would feel at home, and it has become a landmark for drivers passing on I-280. ..... It has long been a thorn in the eye of local residents, and the decorating taste of Florence Fang, who bought the home in 2017, hasn’t exactly helped the house gain popularity. .... Fang is responsible for big metal dinosaurs and Flintstones figurines dotting the property. She also installed a deck, a parking strip and, in a particularly subtle move, an enthusiastic sign proclaiming: “Yabba-dabba-doo.” 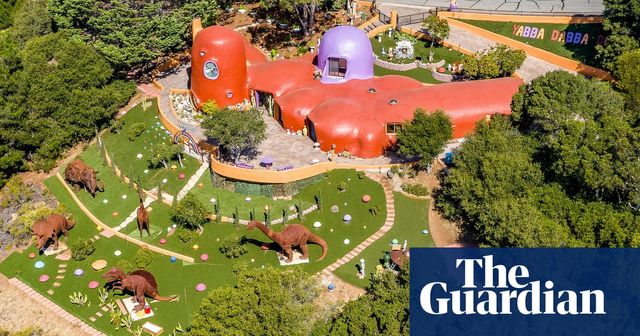