The news cycle is a bit depressing at the moment, so this week we are revisiting the war that planning enforcement officers appear to be waging on cultural icons of the 70s and 80s.

In November, Star Wars memorabilia was in the firing line*, now it is the turn of Dr Who. In particular, a life-size replica of a Dalek, which has taken up residence in a garden shed outside a Grade II listed building in Northumberland. There is no news on whether the shed is bigger on the inside than the outside - although I suspect that if it was, that would be considered a breach of building regulations...

The owners of the Dalek, run the Museum of Classic Sci-Fi** from their Grade II listed property in Allendale. The listing of the property describes it as follows:

Quite how Historic England would describe the Cybermen, Sonic Screwdrivers and swamp-beasts*** currently occupying the basement is unknown.

Northumberland Council do not appear to object to the Monsters in the Basement, but have taken umbrage over the Dalek in the Shed. They have written to the property owner "to advise that this would require planning permission and, due to the listed status of the property, an application is unlikely to be supported."

Northumberland is not the only Council having issues with listed buildings this week. Newark Council is also up-in-arms over unauthorised works*^. In their case, the problem is not Daleks,  but pubs. To be specific, The White Hind in Newark-on-Trent, which has been inconveniently painted blue.

The Council is not a fan of the new colour, stating that it is ' "not in keeping" with the listed building's place in a conservation area.'

The Owner of the, now incorrectly named, White Hind has been told he must apply for retrospective planning permission, which the Council is likely to oppose.

What do both of these, mildly amusing, tales of enforcement have in common? They both involve Grade II listed buildings. This is significant for two reasons:

Now, I am not going to comment on whether a Dalek in a Shed could be considered in keeping with the character of an 18th century house*$; but given that tax took down Al Capone, then it is at least feasible that planning could exterminate the Daleks.

** More information on  the tale of the errant AT-ST can be found at: https://imbusiness.passle.net/post/102f6cz/obtain-planning-permission-you-must-teignbridge-council-faces-a-galactic-planni

**  if you are in the neighbourhood and fancy popping in their website is  http://www.museumofclassicsci-fi.com/

*** not an accurate description of the exhibits. Although I do believe that they include a Cyberman...

*$ Dr Who is all about travel through space and time after all....

The owners of the Museum of Classic Sci-Fi have been ordered to remove a shed from the front of their home which houses the replica Doctor Who villain... Northumberland County Council said the shed did not fit in with the character of the couple's Grade II-listed home.... Mrs Cole said the museum had "brought more than 900 people into the village", with the Dalek making people "smile as they drive up the road"... Northumberland County Council said: "We wish to work with the property owner to resolve this, and we have written to him to advise that this would require planning permission and, due to the listed status of the property, an application is unlikely to be supported." 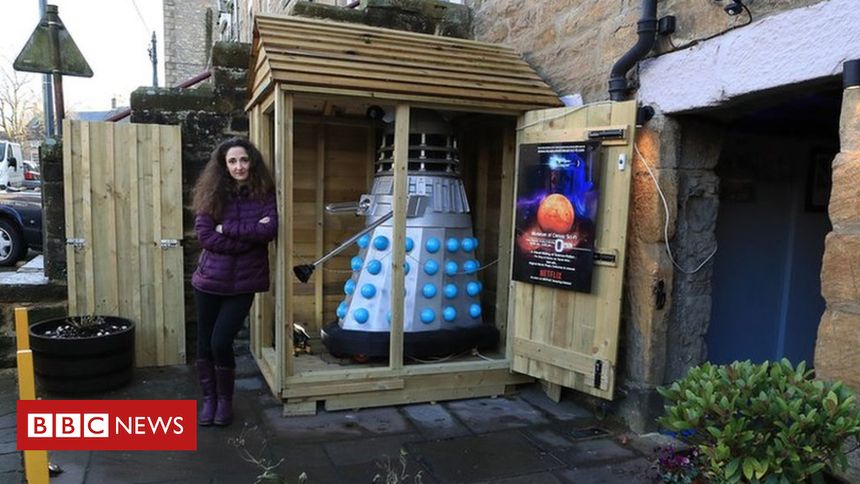