A British Airways check in worker has been dismissed after only a couple of weeks in the job because his hair did not conform to BA's strict uniform standards.  Mr Ouared wore his long hair in a bun and refused to cut it, wear it in dreadlocks or wrap it in a turban - suggestions, he says, that were made by BA.

Mr Ouared is reported to have complained that BA's uniform policy is "100% sexist" and that he has been discriminated against.  Is he correct?

BA's uniform policy applies to all of its check in staff but different standards are expected of men and women. For example, it provides that men's hair must not fall over the face or touch the shirt collar and that ponytails are only acceptable for men with dreadlocks. Women have their own requirements regarding hairstyles, including a ban on close-shaven hair, along with rules on hosiery, make-up and skirt length.

Uniform policies which have different rules for men and women will only amount to sex discrimination if the opposite sex can establish that their treatment is "less favourable".  For example, women who are asked to wear high heels may be able to claim that this requirement discriminates against them because men do not have similar restrictions placed on their choice of foot ware which, in turn, can cause discomfort and harm.

It will also be difficult for employers to be able to justify a policy that requires women to wear skirts rather than trousers.

However, if the standards are imposed equally (even if they are different in some ways), the dress code will not normally amount to sex discrimination.

There's a surprising limited amount of reported cases on uniform policies.  In 1996 a male employee was dismissed from his employment as an assistant on the Safeway delicatessen counter because his hair, which he wore in a ponytail, breached the employer's rules for male staff.  These stipulated that hair must be tidy and not below collar length. This was not for hygiene reasons: the same rule was not imposed on female employees and if this employee had been a woman his hairstyle would not have been a problem. Nevertheless, the rules did not amount to discrimination because both sexes were not allowed to have "unconventional hairstyles". Unconventional hairstyles for men and women are often different - the rule did not give rise to identical results but it was not less favourable treatment.

Are buns still considered unconventional hairstyles for men?  That is probably a matter of debate and may vary between sectors: corporate employers such as BA may well interpret this more conservatively than say creative industries.

But, on the face of it, BA's policy on hair styles does not look as though it discriminates against men.

The government did provide some guidance following a recent parliamentary review that is available here: https://www.gov.uk/government/publications/dress-codes-and-sex-discrimination-what-you-need-to-know

He said: "It's ridiculous in 2018. There are more and more men that have the same hairstyle as me. There's 100% sexism going on." The "man bun" hairstyle has been worn by celebrities such as footballer Gareth Bale and singer Harry Styles. "BA are stuck in the 1970s, their policy is very much from the 1970s, it's not conforming with our times," Mr Ouared said. 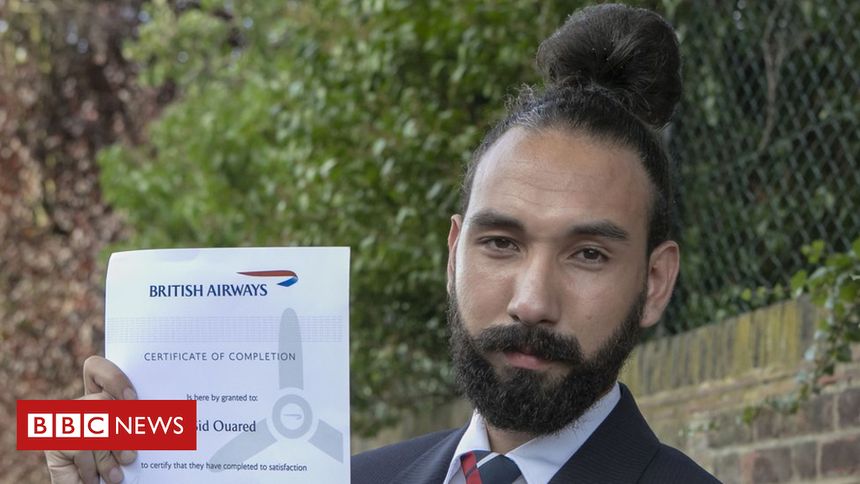