Most planners who are even vaguely familiar with Oxford City Council have heard of the Shark - a 25 ft fibreglass statue, which protrudes from the roof of an otherwise unremarkable terraced house in Headington.

The Shark started life as a protest sculpture in the late 1980s and had a rather tense start in life. The Council refused a retrospective planning permission for it in 1990 and the statue's future remained uncertain until it was granted permission to remain (on appeal) in 1992. It has now been in situ for over twenty years and has become something of a local landmark.

It is now possible that the sculpture, which is somewhat reminiscent of the aftermath of a Sharknado*, could become one of the UK's most unusual heritage assets, as it's owner has applied to have the Shark listed as a local heritage asset by Oxford City Council. If that application is successful, he may also apply to Historic England for a national listing**.

Historic England has a track record of listing quirky or unusual buildings or structures, and the Shark could well be a worthy addition to its 'most intriguing' list. In 2017***, new additions to the listings included:

A new list is published by Historic England every year. Fingers crossed that the Oxford Shark finds its way onto one of them in the not too distant future.

* If you have not seen Sharknado - I thoroughly recommend it. It is a truly awful, but highly entertaining movie, with a number of increasingly ludicrous sequels, about the dangers caused by flying, man-eating sharks.

** See the Telegraph article, below, for more information

Bill Heine, 73, has applied to have the fibreglass sculpture listed as a local heritage asset by Oxford City Council, meaning it will be preserved for future generations. His 'Headington Shark' attracts thousands of tourists from across the world every year and is "loved by locals", claims Mr Heine, who announced his terminal cancer in November last year.... In a supporting letter he said: "Although the shark was originally greeted with suspicion, it is loved by locals who would be horrified if anything ever happened to it."... The application for it to be listed on the Oxford Heritage Asset Register will now go to the city council, with a decision expected by council heritage officers in the summer. If approved, the next step would be to have it nationally listed with English Heritage. 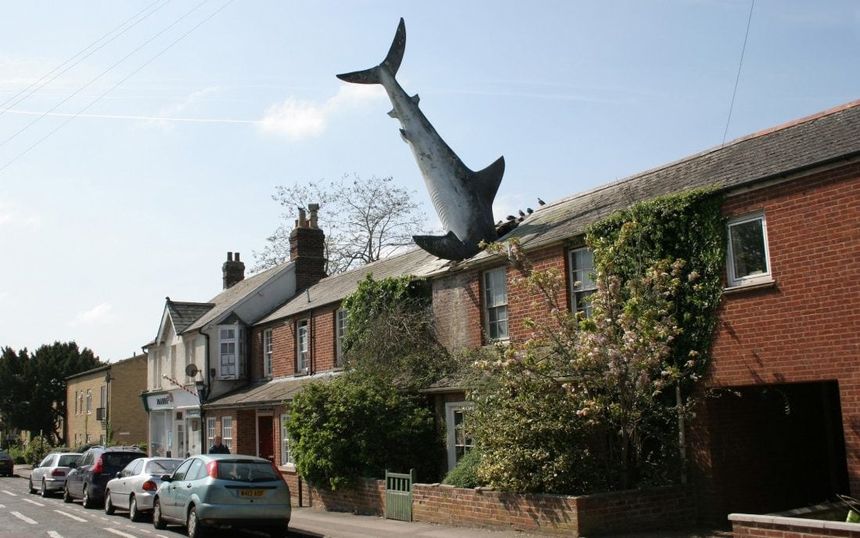 Owner of Oxford shark house now begins fight to have monument protected after his death https://t.co/zQs5KhF3HG via @telegraphnews

Owner of Oxford shark house now begins fight to have monument protected after his deathhttps://t.co/50WRsM57EB