Those of you who have a Planning Resource subscription may have noticed an article, published yesterday, which commented on a mixed use town centre development in Tunbridge Wells, which obtained consent despite not containing any affordable homes.  The link to the article is at the bottom of this post.

Before I get much further, I have a couple of confessions to make:

As such, this is not, by any means, my most objective piece of writing. I have been apathetically supportive* of this site getting an implementable planning permission for quite some time.

That said, I do think credit has to be given to the Altitude Real Estate for achieving something rather special. Their application, for a major development scheme in the centre of a market town famed for writing disgruntled letters of complaint, made it to planning committee with only fourteen letters of objection from the public.  By way of contrast, the Council's own development proposals for a new Civic Centre in the town is facing significant local opposition - with so many people attending a council debate over the initial pre-application designs that they couldn't all fit into the town hall**.

The difference in the levels of public outrage inspired by the projects is, in part, down to their location. The old cinema site is currently a rather ugly bald spot sitting in the centre of town - surrounded by some fairly generic blue hoarding to keep out trespassers. The Civic Centre, on the other hand, will take an (admittedly very small) slice out of some public gardens which are both well used and well-liked by the great and good of our town.

As a local resident, the poor viability of the site, and the lack of affordable housing that follows, is not a great surprise. The old cinema site has been available for redevelopment since the millennium, so it has been on and off the market for longer than I have been a solicitor. The reasons it has not previously been developed are long and varied. It is not by any means an easy location. The development site sits above two railway tunnels, so it is likely that Network Rail will need to be closely involved in the redevelopment proposals, is located in the middle of a conservation area and is surrounded by a variety of heritage assets. Whilst house prices in Tunbridge Wells are holding up well, and the location is perfect for any number of commercial entities with strong covenants, it is going to be a long, complicated and really rather expensive build.

In the current climate, and given the various attacks being made on the very concept of viability assessments at national government level (and also by the Mayor of London); I am actually rather pleased to see that my own local planning authority is being so pragmatic about the development realities of this particular site.

A realistic approach to viability; one which takes account of the genuine development risks posed by a particular development and responds accordingly, is very much needed if we are to meet our housing needs in this country without straying onto the green belt.

This is one resident of Tunbridge Wells, that is most definitely not disgusted by the Council's decision; although I reserve my rights to moan excessively about traffic disruption during construction. I do live in the Home Counties, after all.....

The report said that the applicant, Altitude Real Estate, had submitted a viability assessment that demonstrated that the development could not support the provision of any affordable housing on or off site. Planners said that the lack of affordable homes was "the most disappointing aspect of the proposals". But they added: "While this could constitute a reason for refusing the proposals, the consequence would be that the scheme would not be built, the many benefits that would derive from it would not be realised and there would be little prospect of an alternative scheme coming forward in the near future." "Under the very special circumstances of this long-vacant site, failure to justify non-compliance with the council’s affordable housing policy is outweighed by the significant benefits which will be delivered as a result of the new development proposed," the report concluded. 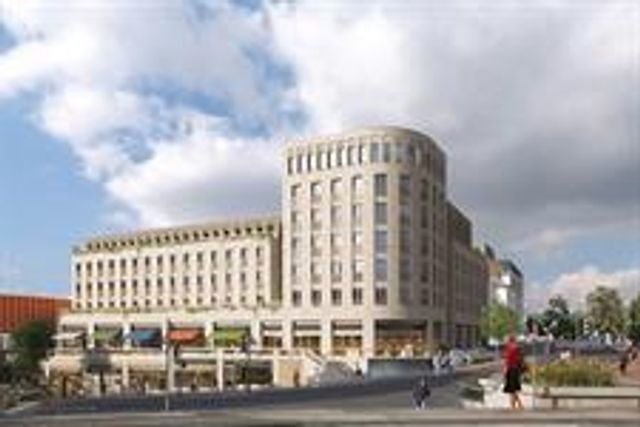