Solving the housing crisis is undoubtedly a difficult thing to do, which might be one of the reasons why there has been so little movement on implementing the Housing White Paper to date.

That said, a lot of people are trying to find solutions. The Government has a plan, although they are admittedly being a little slow in implementing it, and everyone from house-builders and local authorities to tech companies and research facilities are  trying to find ways to sustainably house  the population of the UK.

As such, it is probably not that surprising that two highly imaginative potential solutions have made the news in the last week.

Micro homes and modular housing are slowly gaining traction as a way of providing large amounts of accommodation quickly. Shipping container villages are already being used to provide temporary accommodation for the homeless in Ealing (the development is called Marston Court), and student accommodation in Glasgow (http://www.bbc.co.uk/news/uk-scotland-39378609). Given the ease and speed of construction - which has been compared to building with Lego - I would not be surprised if such off-site builds became more and more popular.

Given that every single child in the UK has been raised on stories about the dangers of straw houses (and in particular, their lack of anti-wolf safety features and unreliability in high winds); it may take a little longer for elephant grass to take off as a building material. It would, however, potentially provide a fairy-tale ending to brick shortages in the construction industry.

"The most ground-breaking thing about miscanthus is that it could decarbonise the construction industry at scale," she added. Her team is working with plant breeding scientists from the university to develop seed-based miscanthus hybrids that could create "an excellent building bale" for different sized construction projects. The university's Dr Judith Thornton said plants had been used for building for thousands of years, however, scientists were now more aware of their physical and chemical properties and have more processing techniques available. "This opens up a lot of opportunities," she said. "Whilst building directly with bales is ideal for self-build housing, in the future we could also be using pre-fabricated panels of miscanthus to build houses, and we could produce loft insulation or fibreboards." 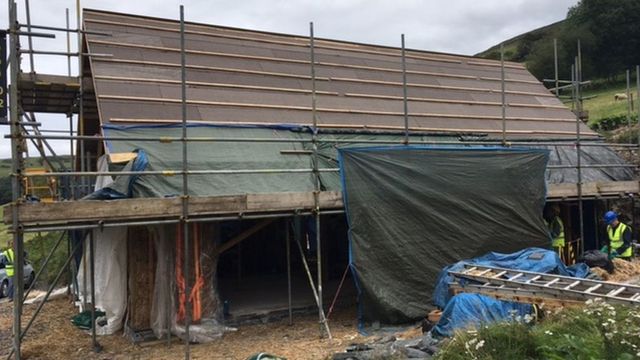