Earlier this month (on 2 August) the Guardian published an article exploring the issues raised by a controversial planning proposal.

The scheme concerned was being promoted by a local housing charity, in London, that was seeking to replace an existing block of alms-houses with an improved and expanded social development, and build some additional affordable dwellings. The proposal  included four houses for private sale, to help disburse some of the cost. The proposed development would be comparatively modest, providing an additional 55 alms-houses, and overwhelmingly devoted to providing affordable housing in the capital - which is desperately needed.  It was also being promoted, and funded, by a housing charity, so the usual complaints about 'fat cat developers' could not be raised against it. In other words, it is precisely the type of development that the Guardian would usually support.

The reason for the controversy, however, was the location. In order to build the new scheme, the charity would have to build over a small area of land that was currently used for allotments: and not just any allotments, the area in question formed part of one of the oldest remaining allotments in London, established in 1832.

In short, the allotment holders (and the London Borough) were being asked to choose. The choice presented by this particular application being between allotments or green space, and housing people who had been failed by the London planning system.

This act of choosing; of weighing up competing needs and priorities within our communities, and how best to meet them, goes to the very heart of our planning system. In fact, it is the precise reason we need land use planning at all. Deciding the shape of our communities, where we should live, work and play, will always result in value judgments about competing uses of space.

Indeed, in my own home town of Tunbridge Wells, the Council is currently weighing up the pros and cons of building a new civic centre, theatre and office development in a location which will involve developing over a small part of a much loved public park.* A proposal which is proving equally, and somewhat predictably,  controversial.

In this respect, the only difference between the allotment proposal (and the Tunbridge Wells Civic Centre development) and the more usual developer led housing schemes which tend to grab the headlines,  is the public narrative that tends to govern how these issues are discussed.

Many are tempted to see developments in 'David and Goliath' terms, with 'plucky local residents'  fighting 'big bad developers'. Whilst these superficial narratives are easy, and often politically attractive, they gloss over the many nuances of the planning system, and the fact development, in general, is necessary if we are going to have the homes, jobs and infrastructure that we will need in the future. Planning for new developments is necessary to future-proof our communities and choices have to be made about where and when new development proposals should come forward.

We have finally and belatedly accepted that the UK needs more housing. Discussing new development proposals  in terms of narratives that pitch 'good vs. evil' simply distracts us from the fact that, in many areas of the Country, we are going to have to make some very hard choices about where these houses should be built.

“I do have some sympathy with the allotment holders but it’s just a little space and housing should be our priority. There are a lot more people like I was eight years ago who need the help of people like Pathways. For the sake of half-a-dozen allotments? Come on, give people a chance. It’s saving people’s lives. ....” Simpson has a point. Many Londoners accept the need for social housing but then flinch at making the ugly decisions that are required. On the other hand, the allotments do bring a crucial splash of green to the urban landscape. Green land should be cherished in London, given its relative scarcity, its beauty and the enormous benefits it provides in terms of biodiversity, the environment, flood defence as well as both mental and physical health. 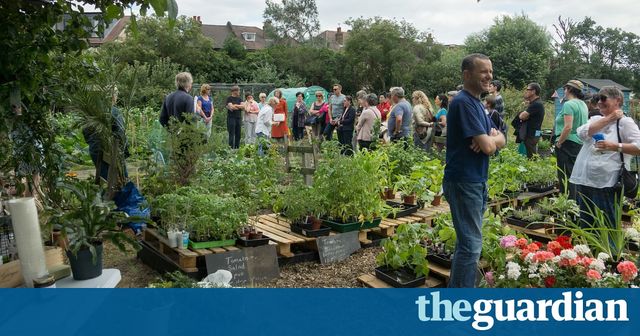