Yesterday the Supreme Court abolished ET fees and Employment Appeal Tribunal fees and ruled that the fee regime is unlawful.

This means that no one should have been asked to pay a fee and, those that did, are entitled to be refunded from the government.

This momentous decision throws up a range of questions that we will attempt to answer.

1. Will claimants who have already paid fees get their money back?

Yes.  The government has said that it will refund all individuals that have paid ET fees.

The union Unison who successfully challenged the fee regime have estimated that the government will have to repay over £27million in fees.

2.  How quickly will claimants get their money back and how will this be administered?

We don’t know how long this process will take.

Fees were introduced 4 years ago and the government will have to review every claim (and counterclaim paid by respondents) to establish how much was paid.  Most payments will have been made via the online system and it is possible that the government will seek to refund fees electronically.  However, this will only be possible if the cardholder still has the card that was used for the original transaction. Many will not.  Therefore, if this option is taken, the government will also have to make alternative provisions to administer refunds. This may include posting out cheques to the relevant parties’ last known address.

The government could elect to ask individuals to apply to have their fees repaid.  If it does so, it will have to widely advertise to ensure that the public become aware they can reclaim fees and how they can do so.

3.  How will respondents recover fees they have paid to claimants under the terms of a settlement agreement or judgment?

If the government repays fees to the party who originally funded the claim (in most cases this will be claimants), respondents who have repaid these may be able to recover payments directly from the claimant.

The issue with regard to settlement agreements is particularly unclear.  Our preliminary view  is that unless the agreement specifically separates the payment of fees from the settlement paid to the claimant, he or she may be able to legitimately keep it as a “windfall”.

Even in circumstances where the respondent can, potentially, reclaim fees, if the claimant cannot or will not repay these, the respondent will have to treat these as a debt and enforce repayment via the county court.  Separate fees will be payable..

4.  Can individuals who did not bring claims because of the impact of fees now bring claims even if these are out of time?

Most tribunal claims have to be brought within 3 months of the issue being complained about.  Time limits are strictly adhered to and tribunals can only extend the limitation period if claimants have contacted ACAS under the early conciliation process and can demonstrate that it was either “not reasonably practicable” to have issued on time in relation to unfair dismissal claims (and other contractual claims) or that it is “just and equitable” to extend time in respect of discrimination claims.  Tribunals have a lot more latitude in extending time for discrimination cases and have, in the past, accepted explanations where claims have been delayed for months and, in rare cases, years.  Extending time for unfair dismissal claims is, however, notoriously difficult.

Clearly, a claimant seeking to bring an otherwise time barred case will have to provide robust evidence as to the reason why he or she did not bring a claim at the time. The Supreme Court’s comments may be useful in this context.  It said that claimants were disadvantaged and could not be expected to afford fees if payment of them meant sacrificing ordinary and reasonable expenditure needed to maintain an acceptable standard of living.  In addition, even where claimants could afford the fees, it accepted that it would have been futile to bring claims where the amounts in dispute were modest and that no reasonable person would risk losing the fee in order to recover them.

If claimants do wish to bring time barred claims, they will have to do so quickly; any new delay will be scrutinised in detail and will make the process much more difficult.

5.  Have tribunals adjusted their processes so that claims can be issued without payment of a fee?

Yes.  The Tribunal Service reacted admirably quickly and has made it clear that no fees are payable to issue a claim or counterclaim or pay the hearing fee.  Claimants and (where applicable) Respondents can ignore any requests to pay fees.

However, at the time of writing this the online system was subject to “maintenance” and claimants wishing to issue claims are advised to do so using the postal system or by personally serving their claim at one of the twelve centres which allow this.

The ET rules will also have to be changed to remove all references to the payment of fees and the penalties for not doing so, but that is likely to take some time.

6.  Will the government reintroduce fees at a lower level?

We don’t know, but believe this will be unlikely, at least in the short term.

The Supreme Court said that the government’s policy aims were legitimate, but the fees charged were disproportionate and denied access to justice to huge numbers of people who would otherwise have used the service.  That rendered the fees unlawful.

Type B fees were also found to have indirectly discriminated against women and other protected groups.

The government acknowledged that it had “not struck the right balance” and could, if it wanted to, start to think about how to restructure fees across the whole range of potential employment claims and offer a more generous remission scheme.  However, that will not be easy and the government is likely to be mindful of the threat of further judicial review proceedings if it gets this wrong.

We think this is unlikely.  The government introduced a mandatory early conciliation service to try and encourage the parties to settle their claims without the need to issue proceedings.  Although, evidence accepted by the Supreme Court found that the proportion of cases settled through Acas has slightly decreased since fees were introduced, it is now an established part of the process.

The supreme court does not say fees are wrong, only that they should be set at a level that anyone can reasonably afford. Access to justice will be all the more important when it comes to enforcing rights that may be at risk after Brexit. As Lord Reed remarked, it is not an idea recently imported from the continent, but a right identified in Magna Carta. Ministers never have an excuse for ignoring it. 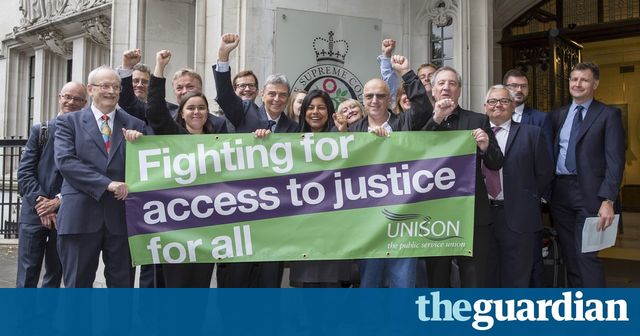