The three main political parties are releasing their manifestos this week and, as a result, I am afraid you are going to be hearing quite a lot from me.

This post takes a look at what the Labour manifesto has to say about planning and development. Arguably it is about a week late, but this way we get to see all of the glossy pictures as well as the policy text.  I will be looking at the Lib Dem and Conservative Manifestos later in the week.

Overall, the manifesto does not contain many surprises from a planning policy perspective.

The usual commitments to promote brownfield development, protect the greenbelt and empower local communities are there. As are pledges to vastly expand council-led building programmes and require local authorities to place more emphasis on suitable housing for the elderly.  Some of the policies announced appear to simply be continuations or extensions of existing planning policy or thinking that was set out in the Housing White Paper - such as requiring local plans to address suitable housing for the elderly and empowering local authorities to get actively involved in bringing developments forward.

The manifesto does include a pledge to build the 'next generation of New Towns' which caught my attention. Given the commitment to 'brownfield first' and green-belt protections,  it might be a struggle to find sustainable locations for completely new settlements. Once the green belt is ruled out, the majority of sites large enough for new settlements tend to be in the open countryside, which has obvious downsides when it comes to supporting infrastructure and transport links.

The planning related proposals are set out in full below, but I suspect that the more 'radical' approach promised by Labour has been save for more 'eye-catching' matters  than the UK Planning system; such as renationalising the railways and taxing companies for paying 'excessive' wages.

Taking each of the three themes in turn:

Unsurprisingly, given that Labour intends to renationalise the railways, these policies tend to be somewhat transport-centric. In particular, Labour promises to:

Given recent rhetoric from Labour on conservative housing policies, it was probably inevitable that Labour's housing and planning policies would focus on a state-led building programme, emphasising social housing. This is exactly what is being proposed, with the manifesto making the following pledges:

Significant additional funding is promised for  local government.  The most significant of these pledges, from our perspective, is contained in a single paragraph - so I am going to quote from it.

Labour pledges to  'properly resource and bolster planning authorities with fuller powers to put people and communities at the heart of planning. We will update compulsory purchase powers to make them more effective as a tool to drive regeneration and unlock planned development'.

The lack of resources in local authority planning departments is causing a lot of problems at the moment, so extra funding is required.  The potential source of this funding is not, however, in the manifesto. Instead, it is in a separate document which looks at how the pledges are to be funded.

"We will initiate a review into reforming council tax and business rates and consider new options such as a land value tax, to ensure that local government has sustainable funding for the long term"

Land value taxes (an annual tax on a property based on the underlying land value) are notoriously tricky to get right and can be extremely unpopular - which may be why this is merely a thought at the moment, as opposed to a firm commitment.

Let’s build a country where we invest our wealth to give everyone the best chance. That means building the homes we need to rent and buy, keeping our communities safe with more police officers, giving our children’s schools the funding they badly need, and restoring the NHS to its place as the envy of the world. ..... Let’s build a Britain that works for the many, not the few. 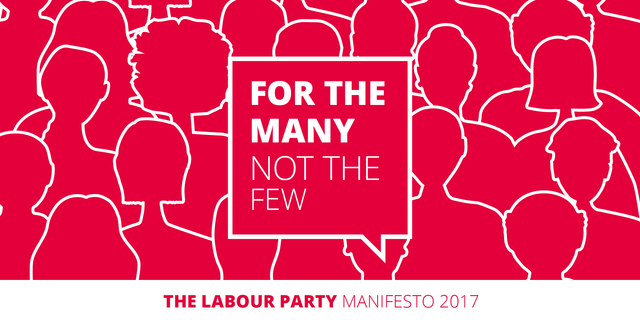