I am very pleased to say that planning enforcement cases do not cross my desk all that often, but when they do the stakes for the parties involved are always high.

The consequences of being at the wrong end of a planning prosecution can be severe. Not only can the Council order that a development be demolished, as the people in this Guardian article have learned, but the Courts can also order extremely hefty fines (there is no upper limit for fines relating to breach of enforcement notices) as well as payment of the Council's legal costs of bringing the prosecution.

In addition to all of this, failing to comply with an enforcement notice which has taken effect is a criminal offence. A successful prosecution would also result in a criminal conviction and potentially even a custodial sentence (although this is extremely rare).

Often early engagement with the Council is the best way to head issues off before they get to the point of taking formal enforcement action.  As a general rule, a Council will usually notify the developer of suspected issues, and provide opportunities for rectifying them, well in advance of serving enforcement notices.

It is much harder to resolve these types of problems once a notice has been served, (in which case the only options are to appeal the notice before it takes effect or comply with it as soon as possible) or the Council has begun to seriously consider a prosecution.

Things are likely to go particularly badly if you appear to have been trying to deliberately 'game the system'.

The most obvious example of which is  the case of the notorious Mr Fidler - who built a house without permission and hid it behind a pile of hay.

In the words of the Guardian:

"Surrey farmer Robert Fidler built a mock-Tudor castle and lived in it undisturbed for four years, hidden behind bales of hay. In 2006, though, he mistakenly believed he was safe from council objections and removed the hay. So began a nine-year battle that only ended when he was threatened with prison. He was unrepentant to the end: “If someone said to Picasso: ‘Rip up your best oil painting,’ he wouldn’t be able to do it. And neither can I.” Whether his pile had more in common with the paintings of George W Bush depends on how you view actual battlements and cannons on a modern home."

Whilst cases like that of the Hidden House can be entertaining to those of us looking in from outside - it is not fun facing the threat yourself. No one likes appearing in the Magistrates' Court *

In 2008, Syed Raza Shah bought a bungalow in Bedfordshire for £750,000. He was given permission to increase the floorspace by 45%, but somewhere, his finger must have slipped on the “order more floors” button because, by 2013, it had become two storeys higher, and increased in floorspace by 165%. ................................. Andy and Frances Murray were forced to smithereen their £500,000 home in east Dunbartonshire after they claimed they were misled by a building firm. In 2012, the builders told the couple the home would meet council regulations and that planning consent would be “given retrospectively”. By the time the council pointed out it was 6ft too tall, 9ft too long, 4ft too wide, had too many windows and a balcony that would invade their neighbours’ privacy, the building company had gone into liquidation. 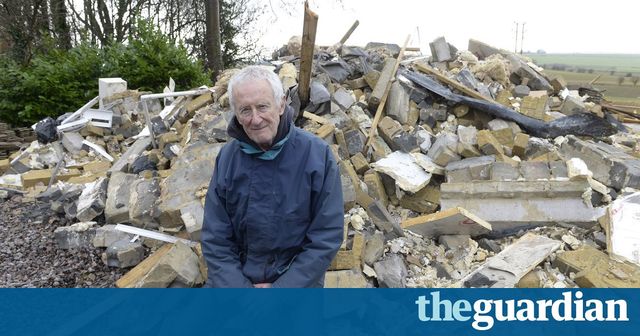